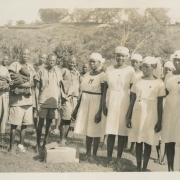 By Suzann Thompson and the CKC Board of Directors

Part of the Center for Knit and Crochet’s social media development process is to find inspiration from the commemorative days and holidays of each month. That’s how I learned about World Leprosy Day, which has been celebrated the last Sunday in January, since 1954.

World Leprosy Day reminded me that I had known about leprosy as a young child in the 1960s, probably from Bible stories. I recall being sad and sorry for people, who because of leprosy, were shunned, feared, and often taken away from their homes to live in isolated colonies. Child-Suzann fervently hoped she would never contract leprosy and suffer as they did.  Adult-Suzann recalled hearing about knitting projects designed to assist people suffering from leprosy, now called “Hansen’s disease.”

Researching the disease today, and the purpose of World Leprosy Day, I learned that a new era of treating leprosy began in the 1940s (See Note 1, below), and that presently, “[t]reatment for leprosy is free and available in every country. The treatment is a combination of three antibiotics known as Multi-Drug Therapy (MDT).” (See Note 2, below).  The course of antibiotics needed to cure leprosy may last up to two years. Patients living in resource-limited areas may not seek treatment, because they “have difficulty accessing health care due to high costs of going to the doctor and long distances to reach providers and clinics familiar with Hansen’s disease.” (See Note 3, below).

The Centers for Disease Control and Prevention says that 95% of people are naturally immune to the disease. Still, globally, two to three million people currently live with leprosy and resulting disabilities. In 2019, around 200,000 of the world’s people (including in the United States) contracted leprosy. (See Note 3, below). A vaccine for leprosy has been approved by the U. S. Food and Drug Administration. (See Note 4, below).  Even with these treatments, the stigma of the disease, and the fear of being isolated from friends and family that often resulted from diagnosis, persist today. (See Note 3, below).

What does this have to do with knitting and crochet?

As I mentioned, in decades past, knitters and crocheters have made garments and other items for leprosy patients. In the photo above from 1948, patients at a leprosy ward in Chogoria, Kenya, received woolen jumpers knitted by volunteers (See Note 5, below).

When I saw World Leprosy Day on the calendar, I thought of Patricia Bobeck, a good friend of mine and fellow member of the Knitters and Crocheters Guild of Austin, Texas,  who told us in the 1980s about a charity project at Ladywood School, in Indianapolis, Indiana where they knitted bandages for leprosy patients. It was a girls-only high school, which Pat attended from 1963-1966.

In the email exchange that followed, Pat wrote, “Reading your message, I saw the [leprosy] bandages in my memory. Garter stitch bands, white cotton yarn, about 4 inches wide, on straight knitting needles, rolled around the needle.”

Pat emailed friends from Ladywood School to find out if they remembered knitting the bandages. Classmate Joan (Fitzgerald) Gutzwiller responded, “Yes, I remember knitting bandages for the [leprosy patients] our Freshman Year. In fact we could knit during Religion Class. The bandages were only about 1 – 2 in wide and as long as we wanted them to be.”

Another one of Pat’s classmates wrote “All I remember knitting at Ladywood were nose warmers!” but she forwarded instructions for knitting or crocheting leprosy bandages from the Development of Vietnam Endeavors or D.O.V.E. Fund’s Bandage Brigade project, a project that was active beginning in 2005.

Before you pull out your knitting needles and crochet hooks, read this: By the end of 2017, the Bandage Brigade declared “Mission Accomplished.” They stopped their work of gathering hand knitted and crocheted bandages from around the United States. They wrote:

“…while Leprosy continues, most of the open sores which needed bandaging have been healed. Also, they have been able to start utilizing disposable gauze for bandaging. It is readily available there locally and does not pose the challenge of trying to wash and sterilize. The cost for purchase of disposables is just a fraction of the cost and effort for our volunteers to make the knit bandages, ship them to Ohio. Then, for D.O.V.E. Fund volunteers to package/handle, plus increased expenses incurred transporting them to Vietnam and distributing them within the country.” (See Note 6, below).

Further research I did in the Portal to Texas History showed me that preparing bandages for leprosy patients was an established charity among clubs and church groups. In 1968, the Presbyterian women’s group of Ballinger, Texas, reported, “Thirty bandages were knitted for a [Leprosy] Colony in Thailand.” (See Note 7, below).  I’m sure you can find similar examples in newspaper archives from around the United States, and more research needs to be done to learn why this became an important charitable activity at this time.

Knitting leprosy bandages was straightforward: using No. 10 crochet cotton in white or cream and small needles, cast on stitches to achieve the desired width, and knit hundreds of rows, until the bandage measures about 48 inches (130 cm) in length. OR, with a small hook, crochet a foundation chain and single crochet for hundreds of rows until the bandages measures about four feet (1.3 meters) long.

However, a pattern for bandages published in Coats & Clark’s Quick Tricks, Book No. 188, published in January 1968, might have required a bit more concentration. (See photo and Note 8, below).  It looks as if there’s a subtle detail along the sides of the bandages. Could it be a reverse garter stitch, where you purl the first and last two or three stitches, and knit the rest?

World Leprosy Day in 2022 reminds us that the suffering and stigma of leprosy continue today for many individuals. Though knitting and crocheting bandages for leprosy patients is no longer helpful, you can still make a difference by donating to the leprosy missions and advocacy groups listed below. And, armed with facts and thoughtful language, you can also help end the stigma of this treatable disease.

Do you have memories of knitting or crocheting bandages for leprosy patients or for other charitable purposes? The Center for Knit and Crochet is interested to know about your experiences! Please write down your recollections, and send them to info@centerforknitandcrochet.org, with subject line Making Bandages. Send photos, too, if you have them. We will be in touch as we hope to add examples of knitted and crocheted bandages to CKC’s Crowdsourced Collection.

Further Reading and Resources on Understanding and Eradicating Leprosy:

Want to join the discussion?
Feel free to contribute!

In the Loop, January 2022
Scroll to top
We use cookies on our website to give you the most relevant experience by remembering your preferences and repeat visits. By clicking “Accept All”, you consent to the use of ALL the cookies. However, you may visit "Cookie Settings" to provide a controlled consent.
Cookie SettingsAccept All
Manage consent