In November 2012, CKC’s Founder, Ms. Kendrick-Hands initiated a symposium entitled “Knitting Heritage Museum: A Work in Progress,” hosted by Dr. Ellsworth Brown, Director of the Wisconsin Historical Society, and funded in part by a $5000 grant from The National Needlework Association’s Yarn Group.  An interim, nine-member volunteer Advisory Board created at the symposium to shepherd the Center’s initial phases of development forward has evolved into CKC’s current Board of Directors whose short bios, below, attest to their depth of knowledge and experience in knitting, crochet, development, outreach, volunteer organization, governance, finance, collections, exhibitions, fundraising, and technology.  Several founding Board members are still serving on CKC’s Board today, providing organizational continuity.  The Board seeks nominations annually from CKC members.  If you are interested in learning more about serving on CKC’s Board of Directors, or want to recommend a friend or colleague, please contact us. 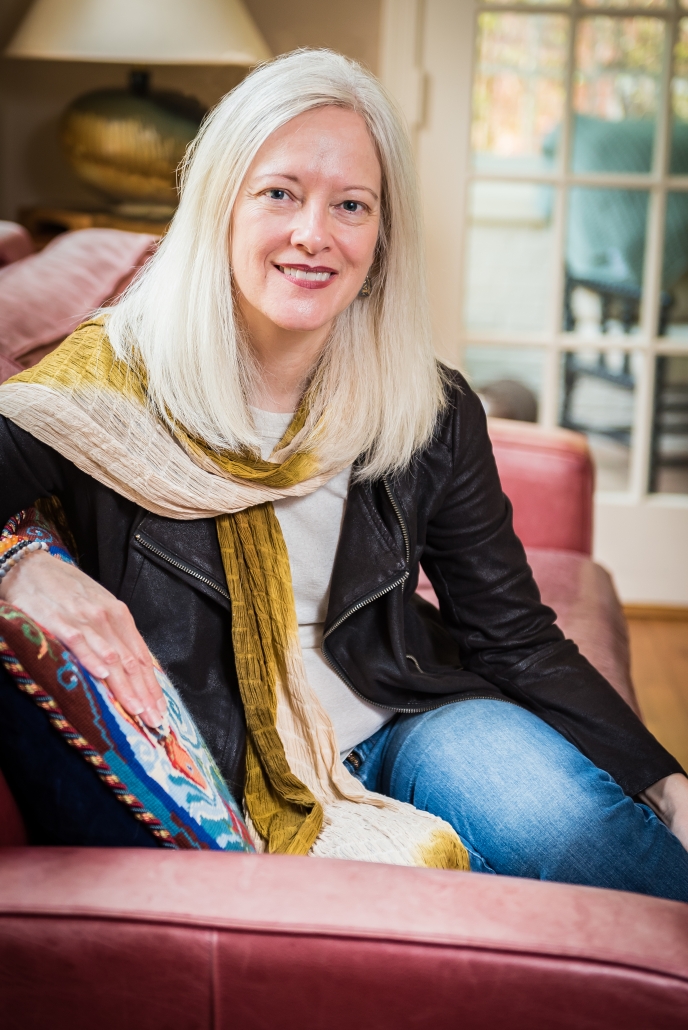 Jennifer Lindsay is an independent curator, scholar, arts educator, and community advocate specializing in craft and contemporary textiles.  She leads the initiative to develop the Center for Knit and Crochet as a digital entity, merging the interests, expertise, and collections of makers, scholars, and museum professionals.  She holds an M.A. in the History of Decorative Arts from the Corcoran College of Art + Design.  Her Master’s thesis, Mary Walker Phillips: ‘Creative Knitting’ and The Cranbrook Experience, 2010, documents the emergence of knitting as contemporary art.

Lindsay coordinates exhibitions, collaborative works, and public programs that blend art, science, hands-on activities, and community empowerment for museums, arts organizations, and civic stakeholders.  Past projects include The Smithsonian Community Reef, a display made with the work of more than 800 crocheters nationwide for the National Museum of Natural History’s 2010-11 exhibition of the Crochet Coral Reef.  Lindsay’s scholarly articles are published in The Textile Society of America’s Biennial Symposium Proceedings, Rowman & Littlefield’s Innovative Approaches in Museums series, and The Journal of Modern Craft.  Sixth & Spring Books and Clarkson Potter published her original knitting designs and patterns in 2003-2007. 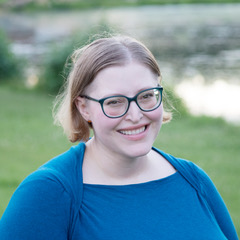 Rebecca J. Keyel is a Design and Textile Historian and a Folklorist. She holds a PhD in Human Ecology (Design Studies) from the University of Wisconsin-Madison, an MS in Human Ecology from the University of Wisconsin-Madison, and a BA from Wellesley College. Her dissertation project, “Defense Knitting: Women’s Volunteerism During the First and Second World Wars” examined American women’s hand knitting for servicemen during the First and Second World Wars and its relationship with labor, patriotism, and the zeitgeist of the homefront through archival research and reconstruction knitting. Her research interests include material culture, textile and knitting history, folklore, and home craft. She is the author of a recent book chapter on Red Cross knitting patterns titled “Knitting Instructions: Red Cross Production Patterns, 1917-1965.”

Like many elementary school students, Suzann Thompson learned about American tall tales.  Already a confirmed knitter, Suzann was thrilled when her teacher told the class that tall tales were also called yarns. Learning to crochet was to come later, and her first foray into the professional needlework world began when she crocheted and sold granny square drawstring purses during junior high school. She decided against mass production as a career. Years later, she designed knitting, crochet, and craft projects for publication in magazines and books. Eventually she authored Crochet Bouquet: Easy Designs for Dozens of Flowers, Crochet Garden: Bunches of Flowers, Leaves, and Other Delights, and Cute Crochet World: A Little Dictionary of Crocheted Critters, Folks, Food, & More, all published by Lark.

Seeking a way to make knitted wall art, Suzann developed her signature TextileFusion technique, incorporating knitting, crochet, quilting, and embellishment. In 2016, she created the Celebrate Doilies exhibit, which features her doily-inspired TextileFusion art, works by Texan poet Sandi Horton, and doily heritage in the form of stories and photos from doily makers of the past and present. Celebrate Doilies travels to various locations around Texas and, Suzann hopes, beyond. Currently, she is planning and seeking funding for another exhibit, in which her textile art anchors an exploration of electrical technology and its impact on human and natural environments, and will include personal stories and artistic contributions from rural communities.

Suzann blogs at www.textilefusion.com/blog, where she will be spreading the word about CKC’s Digital Repository, online exhibitions, nomenclature project, and more. 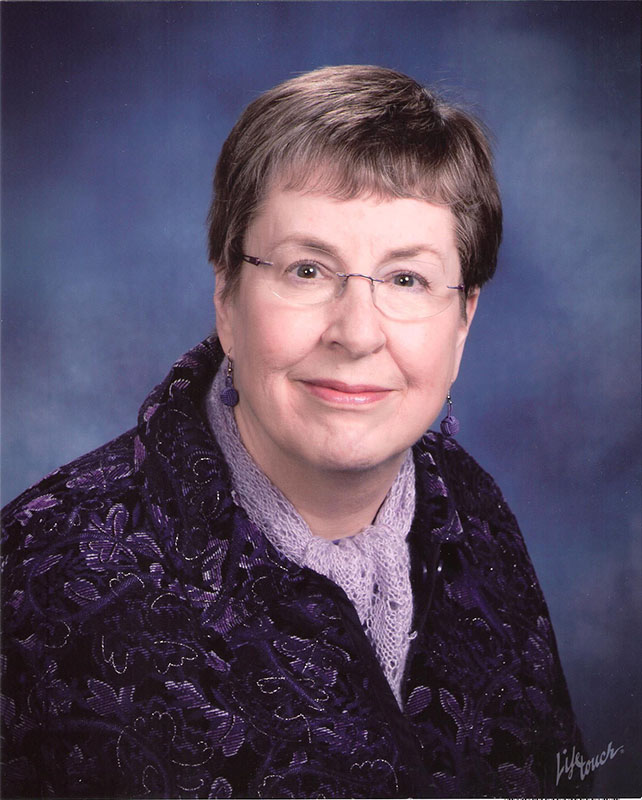 Marilyn Huset is an ardent knitter and a member of the Madison (Wisconsin) Knitters’ Guild (the largest in the U.S.). She holds a B.S. in accounting and is a Certified Public Accountant (CPA). She retired from TDS Telecom as Manager of Financial Communications, where she was previously Manager of Policies and Procedures and Manager of Accounting. At TDS Telecom, with newly acquired companies, and as national president of the American Woman’s Society of CPAs (AWSCPA, www.awscpa.org) she oversaw and revamped management structures, managed corporate records, annual meetings and board actions, and revised bylaws. She also co-authored a book on the 75-year history of the AWSCPA. She served on the American Institute of CPAs’ Work/Life and Women’s Initiatives Executive Committee and co-edited the book Promoting Your Talent: A Guidebook for Women and Their Firms by Nancy Baldiga. She is a member of the Wisconsin Institute of CPAs, chaired its Public Utilities Committee, and served on its Task Force for the 21st Century. She is active in civic organizations and served as a treasurer for her church during two reorganizations, creating internal controls and a new church constitution.

CKC Board Members (in alphabetical order):

Heather Hernandez is a librarian with experience in public, academic, special, law, and museum libraries.  She holds an MLIS from the University of California at Berkeley, and specializes in cataloging, metadata, and the preservation and repair of paper-based library materials.  A fiber enthusiast since she began to embroider around age 5, Heather became an avid knitter and crocheter in the 1980s.  Sewing, learning to quilt, mending, writing, playing Dungeons & Dragons, baking, and cooking keep her busy as well.  You can find her on Ravelry as igel, and as @ulmerigel on Twitter, Instagram, Flickr, and iNaturalist.  Heather speaks and reads German, and also loves hedgehogs (“Igel” in German.)

Callie Lasch is a Producer, Director, and Writer of public interest media. For over 20 years, Lasch has advocated for a greater appreciation of the value of the arts, including a focus on raising the profile of knitting and crochet.

Callie is also the Founder and Co-Director of The Institute for Therapeutic Craft & Creativity https://therapeuticcraftcreativity.com/p/about-itcc an online educational resource which produces talks, workshops, and videos about the power of creative making and engaging the hand-brain connection as a transformative tool for learning, cognitive development, and healing.

Additionally, Callie develops and facilitates public and private experiential programs for museums, galleries, and other arts organizations. Programs involve collaborative activities designed to expand innovative and solution-oriented thinking, and include professional development initiatives for corporate executives, school administrators, artists, scientists, engineers, veterans, students, and communities seeking to understand that the creative process is much more than a skill, but a way of operating.

Marina Scott is a knitter of over 20 years, self-taught thanks to the dollar spot at Target where they had yarn and needles and she couldn’t resist a good deal. She knits for fun and relaxation and enjoys simple patterns. Also a designer, she has several published patterns on Ravelry, Etsy, and Loving Crafts. She enjoys a series of posts she does on Instagram (@heartbunknitsandmore) called “knitting around the world” where she posts pictures of the globally diverse community that is knitters, crocheters, spinners, and weavers. A content associate for the start-up company Making, she writes blogs on various craft-related topics. The rest of her time is spent as a pediatric occupational therapist working with kids in schools.

Mary Claire Phillips is a Historian, Activist, and Knitting Teacher living in Washington DC. Prior to joining the Center for Knit and Crochet, Mary Claire has worked as an independent curator, public history consultant, and writer. Her work ranges from guest blog posts for the Library of Congress’s Veteran’s History Project to curating an exhibit with Goethe-Institut DC and Schwules Museum Berlin highlighting Queer life in the nation’s capital.

Phillips graduated with a B.A. History & Government with Honors at the University of Texas at Austin where she wrote her thesis “Uncovering the Story of America’s LGBTQ Servicewomen in WWII”. Her research interests include mid-20th Century queer cultures, public memory, archival activism, and the relationship of handicraft and gender.

Kay is an avid knitter and is a member of The Knitting Guild Association (TKGA) and the Madison Knitters Guild, where she continues to hone her knitting skills and volunteers on the community projects committee. In addition to knitting, Kay is a card making enthusiast and has an interest in history, especially related to hand crafts and fiber. She looks forward to learning more about fiber arts history and helping with the preservation of fiber artifacts. 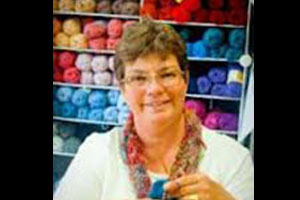 Karen Kendrick-Hands is an attorney, community activist and lifelong, obsessive knitter: artisan, published designer, retailer and educational consultant. Inspired in part by quilt collections and study centers, and spurred by the limited access to knitting and crochet in existing museum and research settings, she is leading the effort to develop the Center for Knit and Crochet, Inc., as a knitting heritage museum and resource to collect, preserve, document and share knitted and crocheted objects and their cultural significance.

Past Board Members Current Volunteers
Scroll to top
We use cookies on our website to give you the most relevant experience by remembering your preferences and repeat visits. By clicking “Accept All”, you consent to the use of ALL the cookies. However, you may visit "Cookie Settings" to provide a controlled consent.
Cookie SettingsAccept All
Manage consent