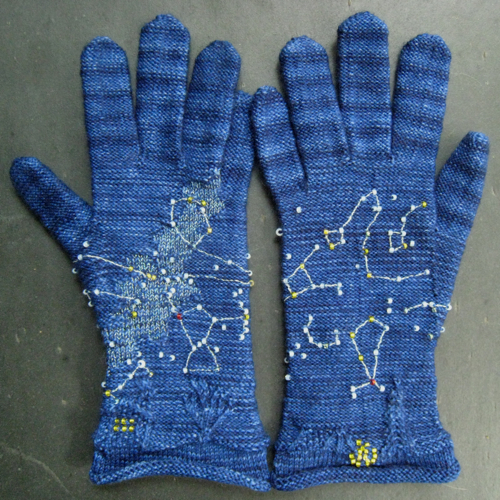 One of the goals of Center for Knit and Crochet is to encourage appreciation of knit and crochet objects. How much people are willing to pay for an item — its monetary value — is one crude measure of how much something is appreciated. So, let me start this post with a question: How much would you pay for these gloves?

These are Meredith Wills’ “Starry Night” gloves from the November 2010 — January 2011 issue of Cast On magazine. The gloves are primarily reverse-stockinette, so lots of purling and not so much knitting. Six different colors of beads are pre-strung in order to represent different magnitudes and colors of stars. Textured details at the cuff are working in Bavarian cross stitches. The Milky Way is worked in stockinette and then duplicate stitched with blending filament to make it shiny. Embroidery stitches are added with metallic braid after the knitting to emphasize the various constellations. If you know how to knit, then you know this is the sort of project that requires constant concentration and is never fast. The result is a map of the night sky on your hands.

I happen to own these gloves. I acquired them in the auction at the TKGA fall show in September 2011. What was my winning bid? $50.

To be fair, these are small gloves and I like to think more people would have bid on them if they had fit. But still, fifty dollars was such a steal I feel a little guilty even today. Meredith’s work is glorious and technically sophisticated. And even today, four years later, only two people on Ravelry have had the tenacity to knit through this pattern. The price I paid is at minimum a misdemeanor against knitting. It is emblematic of a larger issue. If knitters, who understand the time and skill invested in an item, aren’t valuing it, how can we expect non-crafters to value our work? By valuing knit and crochet objects in the same way we value other historical artifacts or other works of high craft, Center for Knit and Crochet hopes to encourage a greater appreciation of all our knit and crochet work.

Dreaming of Wool
Scroll to top
We use cookies on our website to give you the most relevant experience by remembering your preferences and repeat visits. By clicking “Accept All”, you consent to the use of ALL the cookies. However, you may visit "Cookie Settings" to provide a controlled consent.
Cookie SettingsAccept All
Manage consent