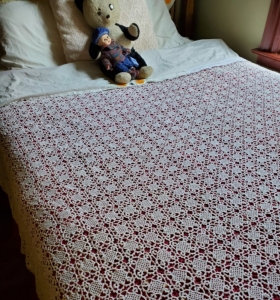 Growing up, I was surrounded by beautiful crocheted items–I wore cute crocheted vests, snuggled under crocheted afghans and blankets, and sometimes got to sleep in the crisp, cotton sheets with beautiful crochet edgings.  But prettiest of all were the items made out of “the  squares.”  I only ever knew them as “the squares,” delicate motifs crocheted by my grandmother, and assembled into things of beauty.  After she died, I inherited a gorgeous coverlet of them.

As the years went on, I kept an eye out for any pattern of this lovely motif.  In 2012 I picked up a copy of Crochet Traditions, a special issue of Interweave’s PieceWork magazine (ISSN 1067-224), opened the cover, and there was a photo of “the square.”  And on page 48, right there, in my hands, was a photo of an edging made with “the square,” my grandmother’s “square,” under the headline, “A Vintage Venetian Border,” next to a reprinted pattern from the December 1916 issue of Needlecraft Magazine.   I was thrilled!  And I had the beginning of a name for “the square”–Venetian.  And a date, 1916, that was delightfully old enough for public domain works to possibly appear in such treasures as The Internet Archive and the Antique Pattern Library.

But before searching such vast online sources with only the words “Venetian” and “crochet,” I turned to Ravelry’s advanced pattern searching, where the word “Venetian” could be refined according to the craft of crochet and the shape of a square, and, bingo!  There it was!  The Venetian Square, with notes about other pattern sources!  The pattern is known to have been published in Venetian Crochet: Patterns For 1915 Motif, Collar and Lace Edging, Needlecraft Publishing Co., Published 1915, and Figure 36 in the same publisher’s Handbook of Crochet No. 2, available in the Antique Pattern Library.  It was also published earlier, in 1900, in Sophie Tatum LaCroix’s Old and New Designs in Crochet Work as motif no. 201 on page 6, where it says, “This design originated in Bohemia.”  The Ravelry pattern also links to blog posts about it, such as Mmatilda/Anna’s (in Swedish with Google translator for other languages).

It makes me so happy to think that this little thing–this little crocheted motif–is part of so many people’s lives around the world, and one thing that I find so special about the CKC’s Crowdsourced Collection is that it provides a way for me to share the beautiful coverlet while I still use and enjoy it, with all the information that I have about it, and its maker, my grandma, known to her friends simply as “A.” 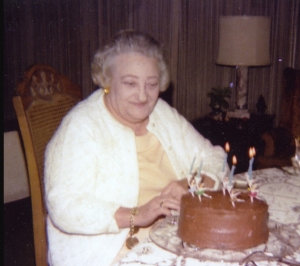 So if you’re looking for some vintage crochet inspiration for CKC’s Craft-a-long this August, consider “the square” and what could be made from it–an edging, a collar, a headband, a belt, a vest, a dress, a curtain, or even a queen-sized coverlet.

In the Loop, June 2021In the Loop, July 2021
Scroll to top
We use cookies on our website to give you the most relevant experience by remembering your preferences and repeat visits. By clicking “Accept All”, you consent to the use of ALL the cookies. However, you may visit "Cookie Settings" to provide a controlled consent.
Cookie SettingsAccept All
Manage consent