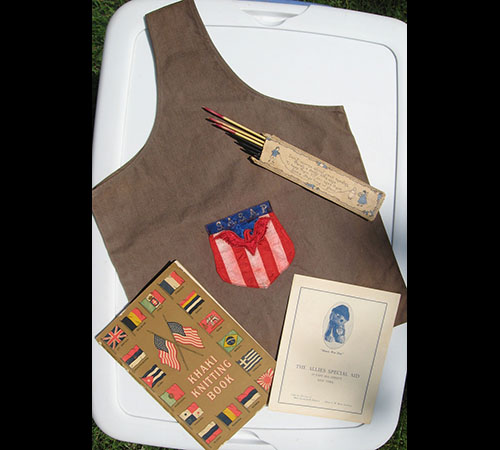 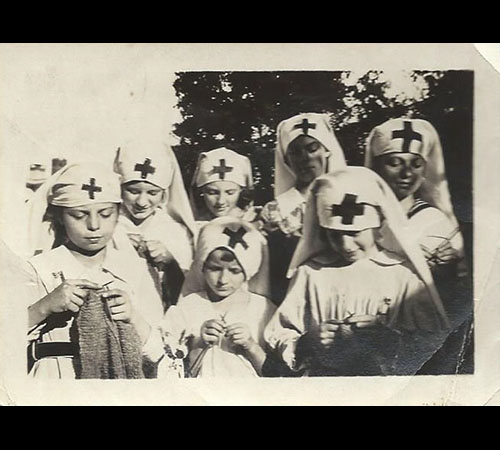 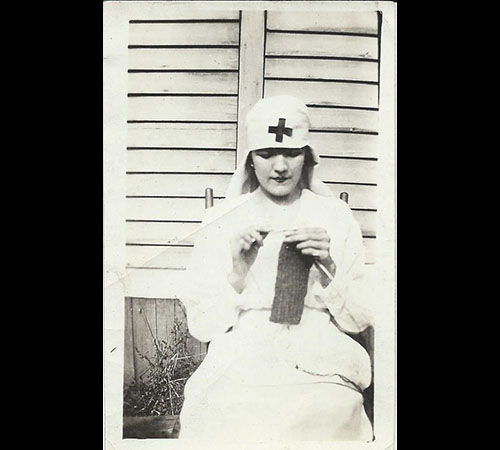 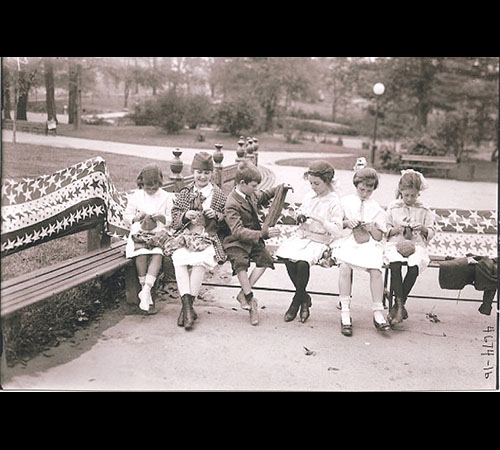 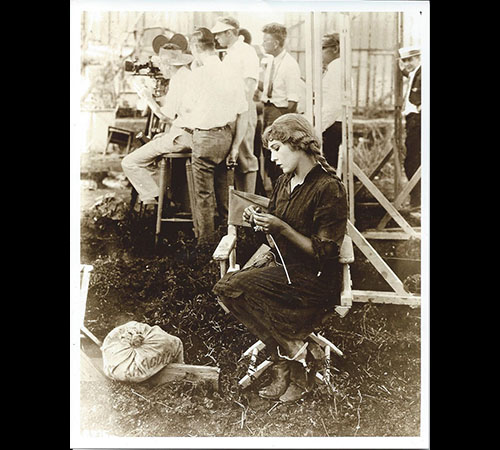 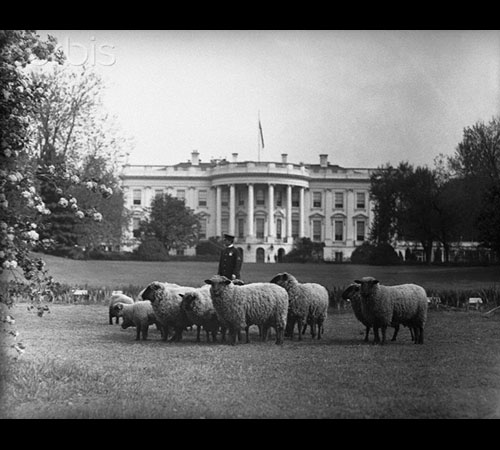 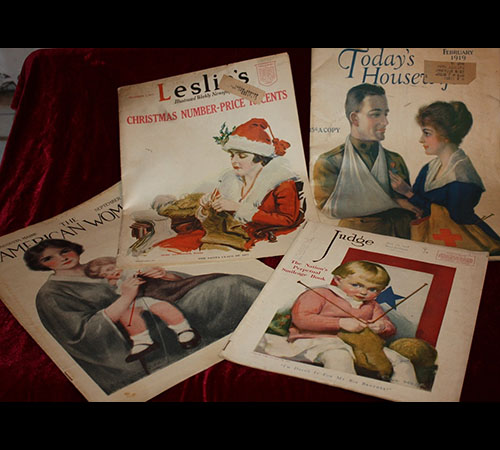 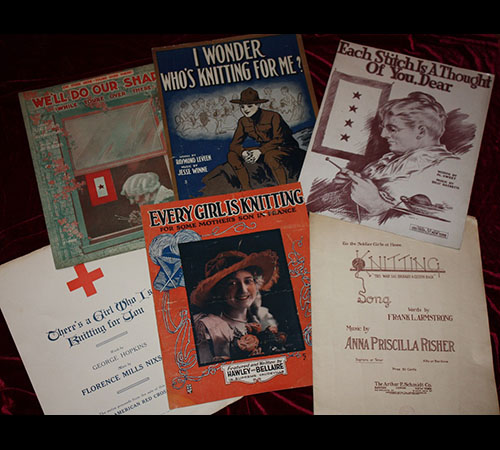 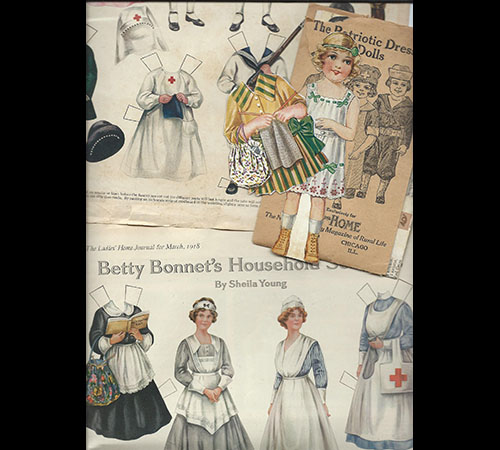 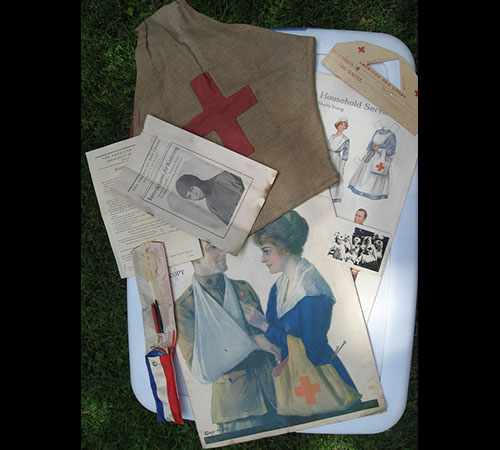 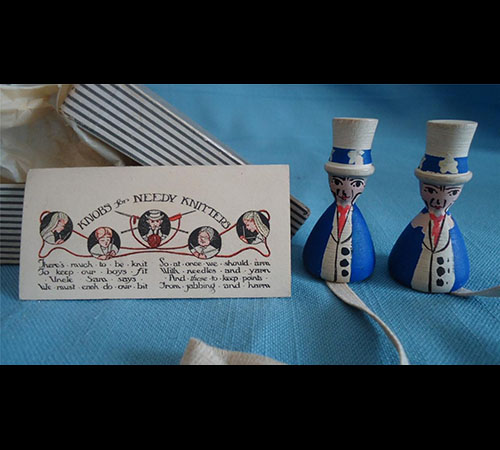 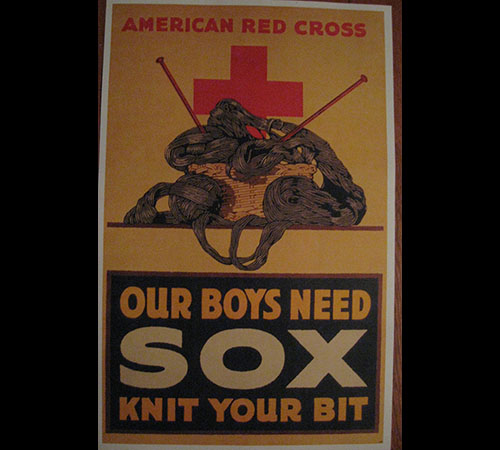 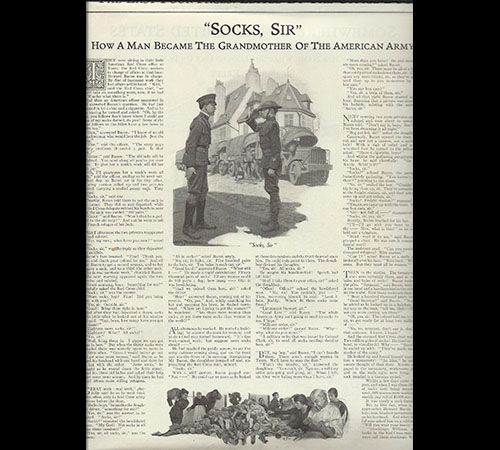 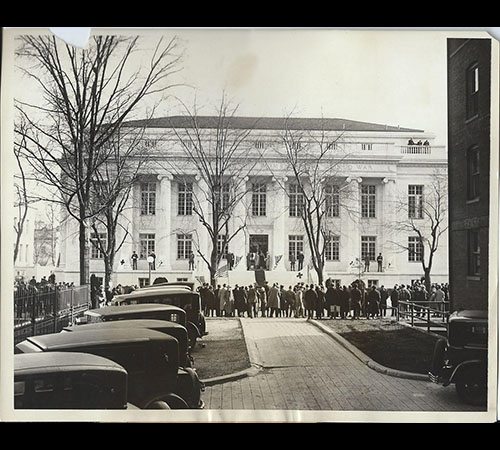 According to the British Library website, during WWI (“The Great War”) propaganda was required “to mobilize hatred against the enemy, to convince the population of the justness of the cause, to enlist the active support and cooperation of neutral countries, and to strengthen the support of allies” (and of those within the homeland). The WWI propaganda employed related to knitting falls in the latter category and, like most effective propaganda, was intense and pervasive…and was ultimately successful.

The Great War was known for its brutality, including many thousands of injuries and many thousands of displaced people throughout Europe, the Middle East, and Africa. Even before U.S. involvement, relief organizations such the National Special Aid Society for American Preparedness, Inc. (SASAP, also known as Allies Special Aid), the American Committee for Devastated France, the Commission for Relief of Belgium (chaired by the future US President—Herbert Hoover and touted to be extremely effective), Americans for Armenian and Syrian Relief, and the Quaker-led Friends War Victims Relief Committee were formed. According to the online Encyclopedia of the New American Nation there were 130 U.S. Agencies involved in war relief. Most of these organizations advertised for knitted and even some crocheted items to provide comfort and relief to fighting men and victims of the war. Some, like SASAP even published patterns and created knitting bags and patriotic tape measures to encourage knitting. The poem printed on the back of my SASAP bag is similar to many of the WWI knitting poems and song lyrics, equating knitters with warriors:

Do you belong to the wool brigade?
If not, then come along.
Mothers, wives and maidens
Make this Army strong.

Gray Wool is our ammunition;
Some make it into balls
Pass them to the knitting squad;
They will soon use them all.

For this is no time to be idle
And sit with folded hands
Pick up your knitting whenever you’re sitting.
A sock soon grows under your hand.

Hark! I hear the bugle call.
Somebody wants another ball.

Once the U.S. declared war, the American Red Cross (ARC) and the Navy League formed an uneasy alliance to consolidate the efforts of other relief organizations, to encourage knitting production, to provide patterns/supplies, to gather finished products, to ensure quality of knitted products, and to distribute knitted items to those who most greatly needed them.  To encourage large “armies of knitters” organizations published posters, fliers, and patterns; and sponsored activities such as knitting parties, knit-ins, and parades.  Knitters frequently attended these functions in ARC uniforms.

Journalists participated by printing ARC patterns in publications, by sponsoring knitting poetry contests, and by publishing press releases.  News people particularly relished stories about unusual knitters: celebrities, men, the elderly, youngsters, and prolific knitters.  They even sponsored and/or advertised contests for the most prolific knitters: those who produced record-numbers of knitted “comforts.”  Journalists also advertised the need for the production of wool, a “critical war material,” even publishing pictures of the small flock of sheep that were kept on the White House lawn to help provide wool (so small an amount that it was mostly symbolic).

Yarn and needlework-pattern companies published booklets including or devoted to patterns for fighting men and war victims.  Most of the patterns published this way were ARC-approved.

Artists of all types became involved.  Graphic artists and cartoonists painted/drew of knitters for posters, postcards, magazine covers/illustrations, sheet music covers, and even paper dolls. Photographers captured knitters with their cameras.  Poets wrote knitting poetry for poetry contests, for inclusion in magazines, for printing on knitting tool packaging, as well as for printing on knitting bags.  Lyricists wrote lyrics for numerous knitting songs and musicians wrote the music for the same songs.  (See http://threadwinder.info/pubs/hist/sheetmusic/WWI.htm for information on many different English-language WWI sheet music publications depicting knitting or with lyrics about knitting.)  Playwrights wrote plays to be presented at knitting bees and other venues.  Novelists included knitting stories within their novels.  There were even hats and badges designed with knitting themes or relief society themes, so that knitters could proclaim their dedication during the rare times that they were not actually knitting.

The ARC even published a booklet: 100 Lies of the Hun, eleven of which countered negative knitting rumors, including rumors that the ARC was selling donated knitted items, that socks were being thrown away after being only slightly worn, and that many of the knitted products were shoddy or unwearable.

All this propaganda was extremely effective.  Knitting in public became not only acceptable, but expected, although occasionally chastised by some clergy and some entertainers for the distracting click of needles and for diverting full attention to their sermons/presentations.  It was a patriotic obsession.  So much so, that towards the end of the war, wool reserves were running low, however at that time the need for socks had grown critical.  Clean, dry, hole-less socks were imperative to prevent trench-foot, frost-bite, and blisters.  Knitters were told to discontinue knitting all other items and to devote all their spare time to knitting socks using any appropriately-colored wool they could muster.  Magazines published articles about Italian women who had been employed to darn worn socks to help meet the need.

After the war knitting contributions were recognized as meeting a critical need.  In 1930, then President Herbert Hoover dedicated the new second ARC Headquarters building (the ARC North Building) in Washington, D.C. to the women’s contributions to winning the Great War, enumerating the contributed knitted items of each type in the citation.  Participants in the knitting campaign have been quoted as feeling they did something to help the war effort, that they alleviated suffering, and that they were calmed by the act of knitting.  There are many stories of thankful warriors and victims, sometimes writing thank you notes, a few of which made it back to the knitters.  The knitting campaign, and the propaganda that fueled it, proved to be successful all around: for the warriors, the wounded, the displaced, and even the knitters themselves.

Johnston, Annie Fellows. Georgiana’s Service Stars (New York: Britton Publishing Company, 1918). Illustrations by Thelma Gooch. [Frontispiece: girl writing in a journal with knitting to her side “If anyone comes along I begin knitting”, quote from book”It is maddening to have the soul of an ‘Ace’ who would dare any fight or a ‘Sammie’ who would endure any trench, and then have nothing but a pair of knitting needles handed out to you.”]

“Every Girl is Knitting  for Some Mother’s Son in France.”Featured & written by Hawley & Bellaire, Jeff Branen Publisher, New York, NY, 1917.

Annual Meeting of the Board of Directors

Duodji:  Needlework and Much More
Scroll to top
We use cookies on our website to give you the most relevant experience by remembering your preferences and repeat visits. By clicking “Accept All”, you consent to the use of ALL the cookies. However, you may visit "Cookie Settings" to provide a controlled consent.
Cookie SettingsAccept All
Manage consent