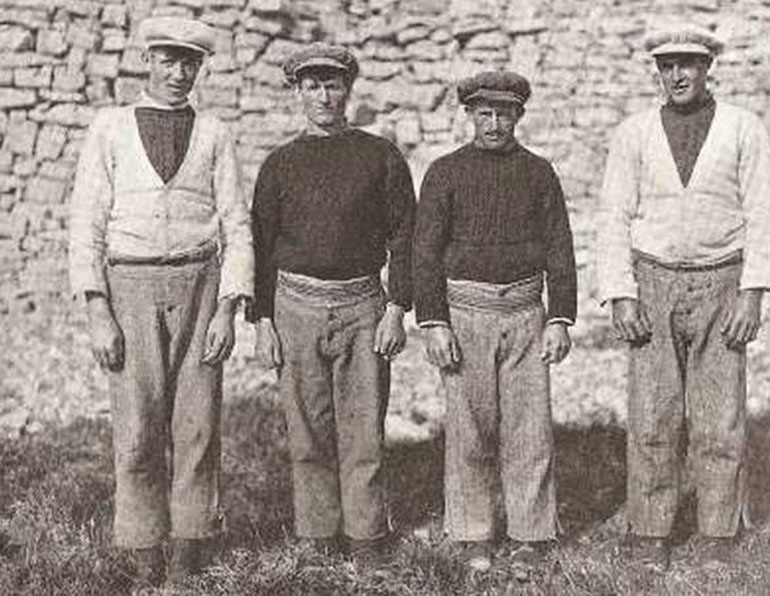 The Aran Jumper is synonymous with The Aran Islands, off the west coast of Ireland. It is world renowned for its intricate patterns and craftsmanship. In 1890, local knitters began selling their produce through initiatives such as the Congested Districts Board for Ireland. Knitting was being encouraged on the Aran Islands. Socks were the main item being hand-knit at this time.

During the early 1900s, a myth arose that each islander or his family had a jumper with a unique design, so that if he drowned and was found, his body could be identified. This misconception originated with J.M. Synge’s play ‘Riders to the Sea’, in which the body of a dead islander is identified by the hand-knitted stitches on one of his garments.

Uncorroborated accounts suggest that early jumpers made their debut on boys taking their First Holy Communion in the 1920s. Others suggest men’s jumpers were knitted by young women for their sweethearts as evidence of their suitability as future wives. It was to be some years before decorative Aran knitting patterns became the symbol of the islands. When the film ‘The Man of Aran’ drew the world’s attention to the islands in 1934, Irish knitwear of this style was not featured.

The First Aran Hand-knits Go on Sale in Dublin

The first Aran hand-knits went on sale in 1935. Dr. Muriel Gahan, founder of the Irish Homespun Society and a dedicated champion of Irish country crafts, opened a store in Dublin called The Country Shop. She visited the Aran Islands and was put in touch with the local knitters and started to buy from them.

The first Aran knitting pattern was published in the 1940s by Patons of England. It was supplied by O’Maille’s shop in Galway, Ireland. During the 1950s, The Princess of Monaco and former Hollywood actress Grace Kelly was pictured in an Aran Jumper while out yachting as was Hollywood ‘King of Cool’ iconic actor Steve McQueen. Demand grew significantly after Vogue published patterns for men’s and women’s Aran Jumpers in 1956. Companies began supplying the island with Irish wool and gradually built up a network all over western Ireland of knitters producing everything from jumpers, to cardigans and bonnets.

The Clancy Brothers Boost US Market and a Cottage Industry Grows

The 1950s and 1960s saw the export trade of Aran Jumpers rise. They were appearing in global fashion magazines and wardrobes. Boosting the jumper’s global acclaim was Irish folk band The Clancy Brothers, who appeared on The Ed Sullivan Show in the USA in March 1961 wearing their Aran Jumpers giving huge exposure to the hand-knits in the North American market. Later in the 1970s, a dedicated cottage industry began to grow on the Aran Islands. Companies began to set up shops selling hand-knitted Aran Jumpers and other garments on Inishmore, the largest island.

After the turn of the millennium, young islanders were no longer farming sufficient numbers of sheep on the islands to meet the demand for wool. This led to the vast majority of Aran Jumpers now being knit on the mainland where there was a better supply of wool. During the Autumn/Winter 2013 fashion season, models at Fashion Week in New York, London, Milan and Paris, walked the runway in Aran Jumpers re-invented by designers JW Anderson and Christopher Kane. The Aran Jumper was having a big high-end-fashion moment.

As of 2015, new natural fibres and design innovations are continually being introduced so that traditional Aran Jumpers rub shoulders with contemporary versions of the classic look in stores around the world. They are featured on celebrities such as Sarah Jessica Parker and Alexa Chung. Aran Jumpers and Aran-knitting patterns remain a popular and practical symbol of Ireland and Irish craft.

The earliest forms of Aran knitwear – from the 1920s. Irish History Links.

Knit and Crochet Connections
Scroll to top
We use cookies on our website to give you the most relevant experience by remembering your preferences and repeat visits. By clicking “Accept All”, you consent to the use of ALL the cookies. However, you may visit "Cookie Settings" to provide a controlled consent.
Cookie SettingsAccept All
Manage consent