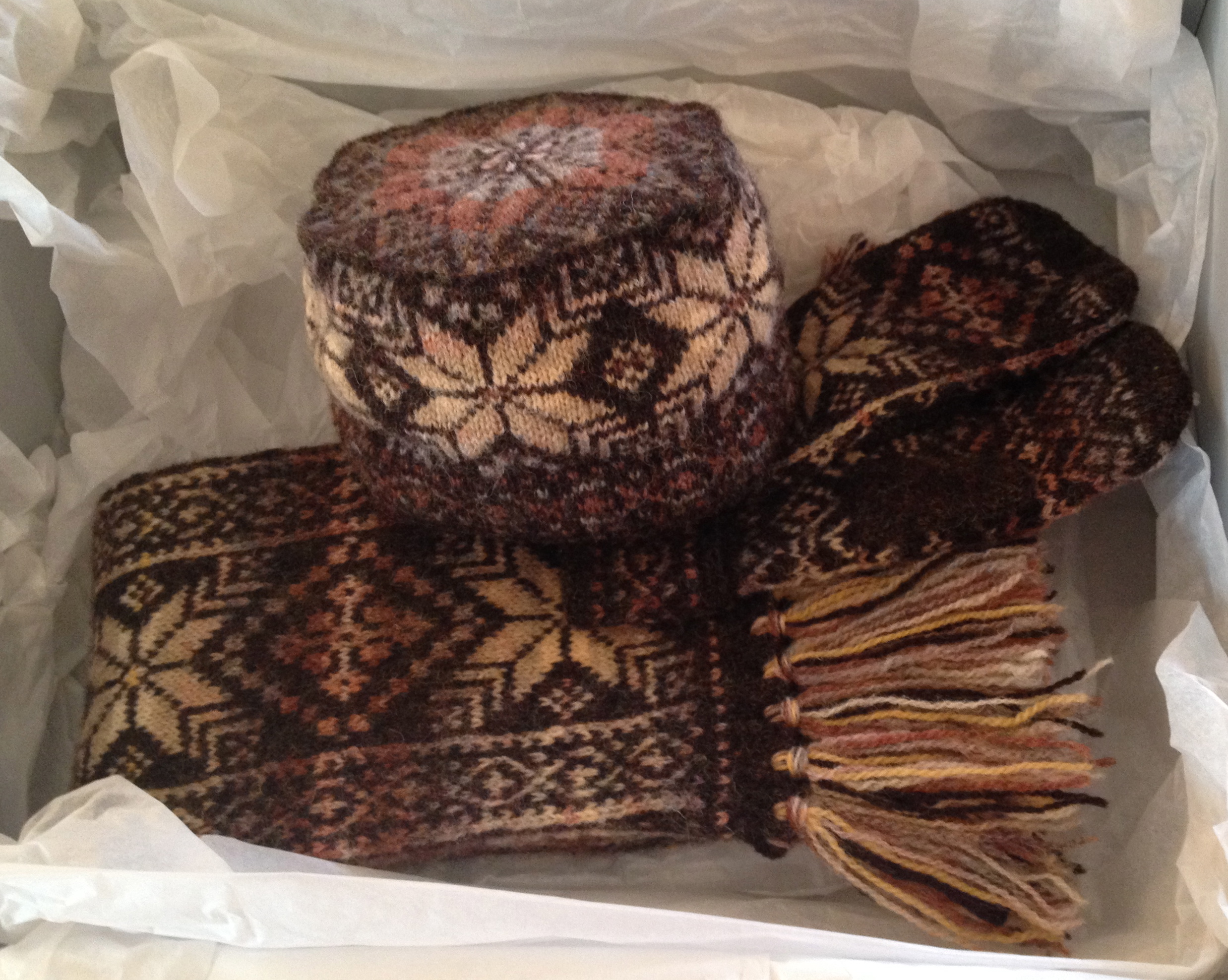 In 1996, I visited Shetland with my husband and in-laws.  I was eager to see examples of the stranded color work that made Shetland and its neighbor, Fair Isle, so famous.  At a local community center, we found a group of women knitting near a display of garments for sale.  The women used traditional knitting belts and long double-pointed needles.  They worked quickly, knitting patterns from memory as they laughed and chatted.

Mrs. Anna Bell Bray was a petite and vivacious woman with fiery red hair.  The traditional garments she had exhibited were extremely sophisticated, enhanced by finishing details that went beyond any knitted garments I had ever seen before.  After I openly admired her work, we shyly settled on a price for a stunning “jacket” or cardigan that she had marked as “not for sale;” she appreciated that I was awed and inspired by its haute couture details, and of the garments she had on display that day, it was the only one we could find that fit me.  I also commissioned a vest for my husband – she gauged his size by the number of pattern repeats she thought would be required, rather than by centimeters.  I lost some of my initial awkwardness about these negotiations when I learned that Mrs. Bray had shipped her custom jumpers, jackets, slipovers, and accessories all over the world; she kept an album of photographs sent to her by the appreciative recipients.  After our visit to Shetland, I sent her a photo of us in our hand knitted sweaters to add to her collection, and we corresponded for a time.  Her letters were fresh and delightful, but she kept them very brief; she always noted that she preferred knitting to writing letters.

Mrs. Bray knitted with commercially dyed Shetland yarns.  She favored bold “Norwegian Star” patterns in luminous colors set off by dark backgrounds dyed to appear like the darker shades of the fleece from the native Shetland sheep.  Over the years, I have carefully studied the garments she made, marveling at the jacket’s reversible collar and doubled cuffs, and the interplay of patterns in the ribbings on the vest.  An earlier example of Mrs. Bray’s work, ca. 1986, attributed to “Annabel Bray” is pictured on page 29 in Alice Starmore’s Book of Fair Isle Knitting, published in 1988 by The Taunton Press.  Alice Starmore described Mrs. Bray’s design aesthetic as characteristic of the post-War era, when the traditional patterns used by Shetland knitters expanded to include new patterns from Norway.  Ibid at 26.

When my in-laws returned to Shetland, they had tea with Anna Bell Bray in her home.  My mother-in-law purchased the hat, mittens, and scarf pictured above for me from Mrs. Bray during one of these visits.  I treasure these garments from the hands of Anna Bell Bray, and take pleasure in how my own history, and that of my family, is interwoven with hers and with the remote beauty of Shetland.  Each year, when the Anna Bell Bray Memorial Trophy is awarded at the Cunningsburgh and Districts Agricultural Society Show for the “best hand knitted Fair Isle garment,” she is honored and remembered in her own community for her exceptional contributions to the art of Shetland knitting.

‘Tis the Season for Gifting
Scroll to top
We use cookies on our website to give you the most relevant experience by remembering your preferences and repeat visits. By clicking “Accept All”, you consent to the use of ALL the cookies. However, you may visit "Cookie Settings" to provide a controlled consent.
Cookie SettingsAccept All
Manage consent