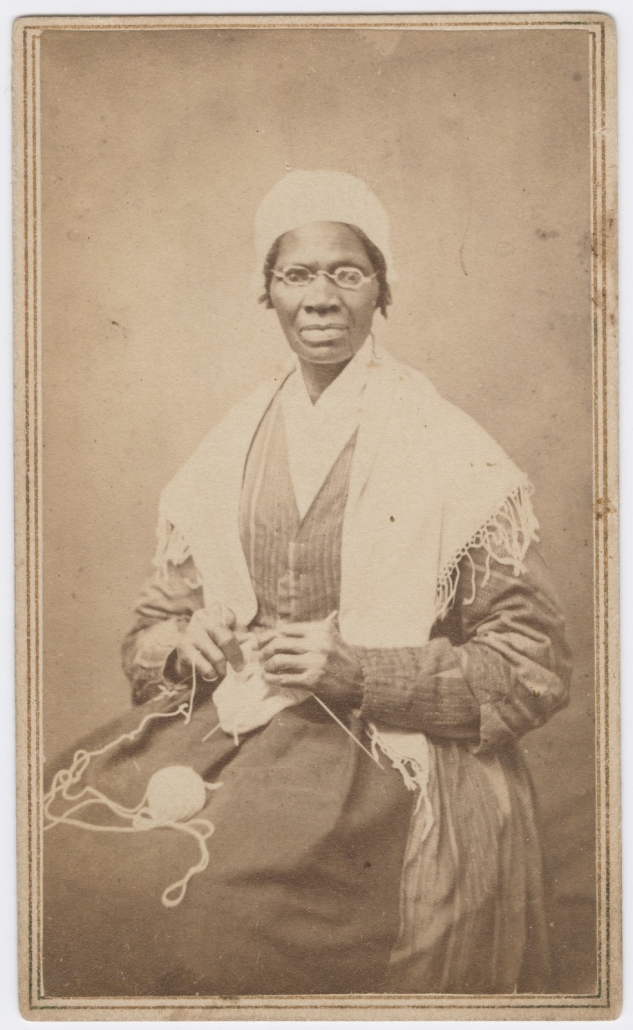 Suzann Thompson, CKC’s Social Media Coordinator, regularly shares images and objects from CKC’s Library and Museum Collections, that reveal the lives and achievements of Black makers.  I intended to compare two such images from our social media archives, but I became deeply engrossed in this “carte de visite” portrait of Sojourner Truth, a former slave turned abolitionist, evangelist, and women’s rights activist, which Suzann posted on Twitter in 2019.

The original is in the collection of The New York Public Library, and Suzann found it by searching CKC’s Library and Museum Collections.* Suzann provided a link on Twitter that takes you to a different portrait of Sojourner Truth in the Smithsonian National Museum of African American History and Culture, with the caption, “I Sell the Shadow to Support the Substance” – this alerted me to the fact that there are four similar portraits in CKC’s archive, and piqued my curiosity further. The Library Company of Philadelphia’s Sojourner Truth portrait has the same caption, https://digital.centerforknitandcrochet.org/items/show/13755), as does the Bentley Historical Library at the University of Michigan’s portrait, (https://digital.centerforknitandcrochet.org/items/show/5379), and likely many other cultural and history organizations have similar portraits. Both The Library Company’s and Smithsonian’s portraits show Sojourner Truth’s copyright notice on the reverse, filed in the U.S. District Court, Eastern District of Michigan, in 1864. The Smithsonian’s version also bears a handwritten note that the portrait was purchased from Sojourner Truth on April 21, 1870 in Washington, D.C.

The Library Company notes in their object record that “[d]uring the period of the Civil War, Sojourner Truth captioned, marketed, copyrighted, and sold at least eleven different carte-de-visite portraits of herself at her lectures and through the mail to earn personal funds and advocate for the abolition of slavery.”  In “Portrait of Sojourner Truth, 1864,” Elizabeth Hutchison of Barnard College, writing for “Picturing United States History,” a website created by the City University of New York explains the popularity of cartes-de-visite in the 19th Century, and unpacks the staging of Truth’s portraits.  They served to underscore Truth’s public image – a woman of wisdom, respectability, industry, and temperance; a matriarch, a preacher, an abolitionist, a human rights advocate.  Truth’s ideas at that time were quite radical, especially since we can hardly be said to have achieved them today – abolition of slavery, equal rights for women and other marginalized groups, and an end to oppression based on race.

It is difficult to tell whether the shawls and caps Sojourner Truth wears in these portraits are knitted or crocheted, but in all four photos, she is knitting.  The Library Company notes that “[Sojourner Truth’s] knitting probably alludes to her promotion of the handcraft as an industry for advancement of former slaves.”  Curious about the significance of the knitting shown in the portraits, I further researched Sojourner Truth and her knitting.  It was difficult to find anything specific, but most helpful, informative, and current was a blog post on the Brooklyn Tweed website written by Ra Malika Imhotep, entitled “Part II: Crafting for Freedom,” published on July 28, 2020. In her rich analysis of the intertwined histories of Black people and handwork, Imhotep, a Black feminist scholar, confirmed that Sojourner Truth was active in a community that supported racial and gender equity in Northampton, Massachusetts called the Northampton Association of Education and Industry where abolitionists operated a silk mill, teaching escaped and former slaves skills that would help them learn to support themselves.  In addition to Imhotep’s article, I have shared other primary and secondary sources I encourage you to explore below.

Truth was born into enslavement in New York in 1797, where she did farm and domestic labor, including the growing, harvesting, and processing of flax and wool, and where she endured unimaginable hardship, torture, suffering, and loss.  Imhotep also shares the story of Sojourner Truth spinning 100 pounds of wool to compensate for farm labor she could not do while recovering from an injured hand in order to “earn” her freedom in 1826 or 1827 – a story originally documented by Nell Irvin Painter in her 1996 biography, Sojourner Truth: A Life, A Symbol.  Dr. Painter estimates this added at least six months to Truth’s enslavement, given the spinning would likely have included washing and preparing the wool, and would have been in addition to other daily labor.

It is possible that the knitting she holds in these publicity photos signifies her role teaching fiber skills to former slaves as a means to independence; it is also possible that by 1864, after almost 30 years as a public figure, lecturing and touring the country to advocate for the end of slavery and the sanctity of human rights, that the knitting is the formalized symbol Truth chose to signify her own emancipation.  As Ra Malika Imhotep writes, “the needles and yarn held in her hands in those 19th century images are not only tools of craft, but symbols of a liberatory ethic that dares us to actively vision and put our hands to work, designing a new world, stitch-by-stitch.”

The National Abolition Hall of Fame and Museum

*Please note that many of the historical photos you see in our social media feed come to CKC from the Digital Public Library of America, which offers access to objects and archival materials freely shared by hundreds of participating US cultural organizations – libraries, museums, historic houses, and archives.  At CKC, we run and periodically update a customized search that pulls all the items related to knitting and crochet from DPLA’s much larger database, and host them in CKC’s Library and Museum Collections where it is easy for you to access them for research and enjoyment, and to communicate with the original collections where these items are housed.  Click on the image in CKC’s archive to be taken to the original record and collection.

In the Loop, January 2021In the Loop, February 2021
Scroll to top
We use cookies on our website to give you the most relevant experience by remembering your preferences and repeat visits. By clicking “Accept All”, you consent to the use of ALL the cookies. However, you may visit "Cookie Settings" to provide a controlled consent.
Cookie SettingsAccept All
Manage consent