Patterns and Copyright: A Problem Today with Roots in the Nineteenth Century 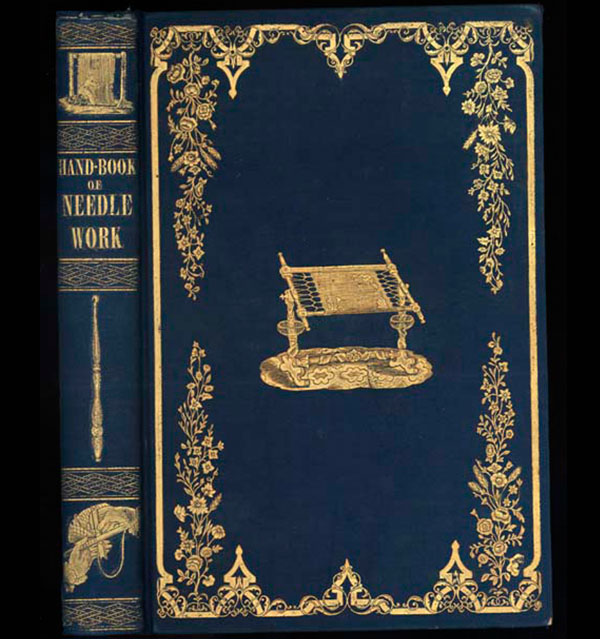 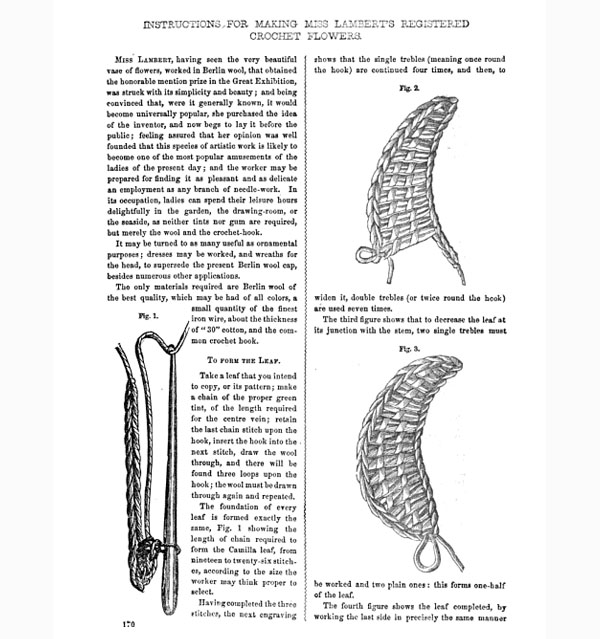 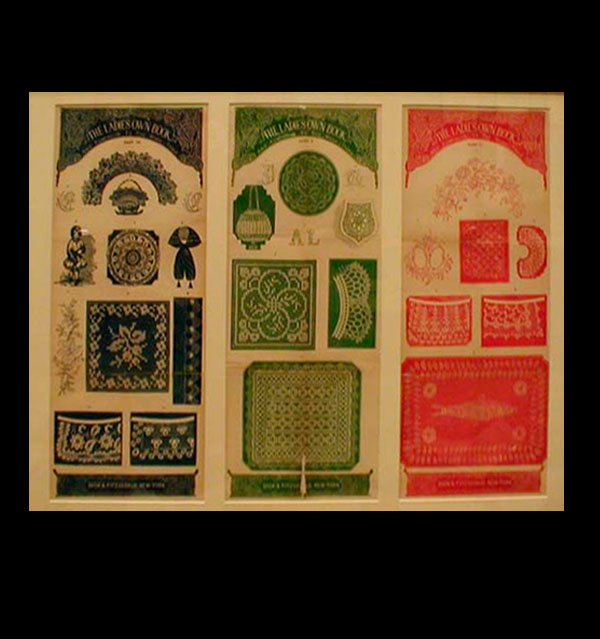 With Valentine’s Day around the corner flowers and chocolate are on the minds of many – or in our world crochet and knit flowers. Among the Library Company of Philadelphia’s many treasures is a cobalt blue volume with gold stamping of Miss Lambert’s The Hand-book of Needlework (New York: Wiley and Putnam, 1842), the earliest American pattern book in the collection. The book provides a detailed analysis of needlework history, materials, and implements along with a wide variety of illustrated patterns for knitting, crochet, netting, braiding, appliqué, and embroidery.

The author, Miss Frances Lambert, an English woman, was the most popular needlework writer in nineteenth century America. She also wrote The Ladies’ Complete Guide to Needlework and Embroidery, My Crochet Sampler, My Knitting Book, Practical Hints on Decorative Needlework, and Church Needlework With Practical Remarks on its Arrangement and Preparation, all of which were reprinted over and over again.

The publication that has intrigued me the most however is Instructions for Making Miss Lambert’s Registered Crochet Flowers. In the nineteenth century patterns were often reprinted with little or no regard to the original designer. This was evident in the case of Mrs. Stephen’s Crochet Book, also in the Library Company collection, which was a fraudulent printing of The Lady’s Own Book, published by W.S. Johnson, of London. In February of 1855 the matter became so heated that Godey’s Lady’s Book published the following statement:

“As an act of justice to ourselves, we deem it due to state that the patterns we have already published, before Mrs. S.’s book appeared, and which are in her book, and those that we are about to publish, which may also be in her work, were taken from the original source, The Lady’s Own Book, published by W.S. Johnson, of London. This explanation is given, as our readers might suppose that we copied from Mrs. Stephens’s book. We have had the various numbers of The Lady’s Own Book in our possession for more than a year; but other novelties demanded precedence. It is an excellent work, and we will furnish it for 75 cents.”

The problem of illegal distribution of patterns remains a problem today in the world of crafting due to the ease of scanning and sharing digital files. Copyright in itself is a difficult area to grasp in our digital world but was even more so in the early nineteenth century when international copyright was not yet established. This is why many British patterns were reprinted by American publishers as their own – down to nearly identical engravings to illustrate the works, as in the case of Mrs. Stephen’s Crochet Book.  In the United States at that time fancy work patterns did not fall under the premise for federal copyright so few designers sought protection. In Copyright in the Early Republic by Meredith L. McGill it is noted that some items, at that time, were “too ephemeral or too local in their circulation to be eligible for or to benefit from federal protection. Only texts likely to retain their value over time were registered for copyright.”

February of 1853 when Godey’s Lady’s Book published an excerpt from “Miss Lambert’s Registered Crochet Flowers” they were sure to note in that Miss Lambert purchased the rights for the designs from the “inventor” whom she met at the “Great Exhibition.” This leads me to believe the “inventor” registered the designs in England claiming ownership and therefore able to sell the rights. The very public effort to give proper credit to female designers was likely due to the leadership of Sarah J. Hale, editor from 1836-1877.

So with guilt free pleasure enjoy and share the patterns for “Miss Lambert’s Registered Crochet Flowers” available and in the public domain on Google Books: Click Here

McGill, Meredith G. “Copyright in the Early Republic,” A History of the Book in America 2, eds. Robert A. Gross and Marry Kelly, 2007.

Annual Meeting of the Board of Directors
Scroll to top
We use cookies on our website to give you the most relevant experience by remembering your preferences and repeat visits. By clicking “Accept All”, you consent to the use of ALL the cookies. However, you may visit "Cookie Settings" to provide a controlled consent.
Cookie SettingsAccept All
Manage consent